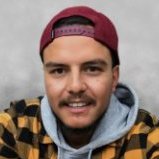 FREE MINI COURSE | How to select anything in Affinity Photo

By i.am.rensi, December 13, 2019 in Tutorials (Serif and Customer Created Tutorials)