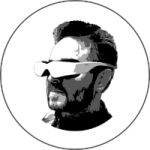 Constraints: an infinite bug story since the launch of Affinity Designer