Edit With : My Suggestion for the Affinity Range 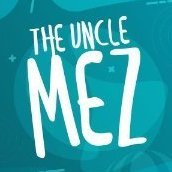 By Uncle Mez,
December 13, 2018 in Feedback for the V1 Affinity Suite of Products