A short and easy tutorial for Pseudo-Halftone-Effects 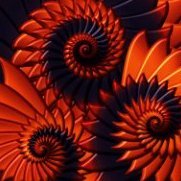 By iconoclast,
March 6, 2022 in Tutorials (Serif and Customer Created Tutorials)